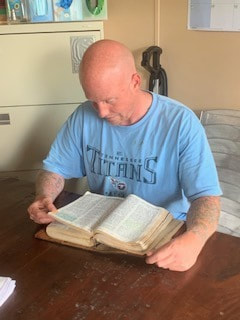 "Safe Harbor has not always been my home. For many years I struggled to get to the point where I can talk so candidly about my experiences. I was raised in a very abusive home - mentally, emotionally, physically. For much of my life I felt like I was an outcast. I've dealt with abandonment issues stemming from the things that I previously stated. There was rampant drug use in my home.
From an early age I witnessed drugs being sold and done by family members around me. At the age of 11, I began to experiment with marijuana. Rapidly, I discovered how it made me feel and when I say feel, I mean suppressed the feelings and emotions that I tried to hide. Some say that marijuana is a gateway drug, and if I looked back on my life I would have to agree.

After using marijuana for a short period of time, around 6 months or so, I began to use crack cocaine. I was just 12. I was immediately addicted to that high and would do almost anything to achieve it again. It was not long after that I was incarcerated for the first time at the age of 15. My first incarceration was a direct result from drug use and I have not been out of the prison system a consecutive year since.

That all changed for me when I came to Safe Harbor. This month marks my 1 year anniversary as a free man in the world. I left prison and knew that I needed to make a change in my life, and that I wanted to help others change as well. That is why I truly believe the Lord has called out to me to be a part of the Safe Harbor program in Jefferson County.
​
My relationship with Christ has only strengthened since I began in the Safe Harbor program, and I know that the staff truly cares about me and my needs as I grow into the man that the Lord wants me to be." - Jeffrey Carter